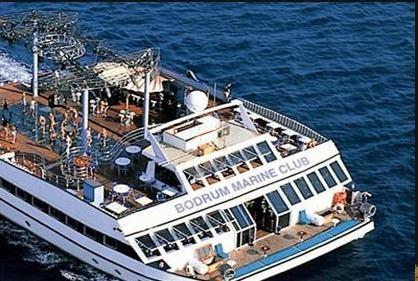 Club Catamaran anchors by Bodrum Castle and is accessible via Bodrum Bar Street. Every night after 1 am the Catamaran nightclub starts to sail and the fun really starts. Club Catamaran returns back to its anchorage point at around five in the morning.

SUMMER IS A LONG PARTY ON THE BIGGEST FLOATING DISCO

CLUB CATAMARAN, 'the biggest floating disco in Europe' (quoted from BILD), has presented a unique party experience to the party people from around the world each summer since 1999.

Anchored just next to the historical St. Peter's Castle, the most popular night club of Bodrum welcomes its first visitors as the buzz on the famous Bars Street soars.

After 10 pm, on the port, among the Turkish and foreign visitors sipping their first drinks prepared by the master barmen and barmaids are frequently the stars of the television, cinema, music and jet set circle. As the rhythm of the night and music picks up speed around past midnight, the party people get ready to groove whole night on the transparent dance floor just above the fishes, and they start to leave the port to flock the boat. CATAMARAN party boat leaves the shore with its four bars in different concepts, VIP booths, customary dance shows, glamorous dancers and famous DJs and the night gets fired up and the dance aboard begins.

Create & Share your Guide to Bodrum with friends and family!