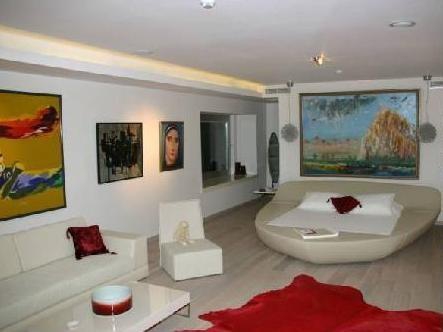 One might be able to guess from its name that Casa Dell'Arte is a hotel which is a true treasure: the hotel is completely dedicated to art. Casa Dell'Arte has brought a new vacation concept to Turkey. In fact, everything at this beach hotel, from the stones to the paintings, are original pieces of art.

'Casa Dell'Arte' means 'House of Art' in Latin, and this is one hotel which really remains loyal to its name. Hotel Casa Dell'Arte is located in Torba, which is an old fishermen's village and a breathtaking area of Bodrum. The hotel boosts a brand new concept which beautifully blends sea, sunlight, art, and delicious cuisines.

The Hotel Casa Dell'Arte Bodrum has 12 suite rooms, which all offer very distinct designs while still holding true of its overarching suite theme of the twelve signs of the Zodiac. Just as each sign of the zodiac has a unique vitality, so do the rooms of Casa Dell'Arte; this is apparent from the smallest details commonly overlooked by other hotels all the way to its architecture. With this theme in mind, the rooms also hold true to the hotel's name by providing a look into the Turkish art world with original paintings by renowned Turkish contemporary artists such as Fikret Mualla, Hamit Gorele, Nuri Iyem and Mehmet Guleryuz.

All of our providers offer 24/7 support

Create & Share your own Guide to Bodrum with friends and family!

We Are Part of the My Guide Network!